How to Tame Sound with Wood Coffered Ceilings 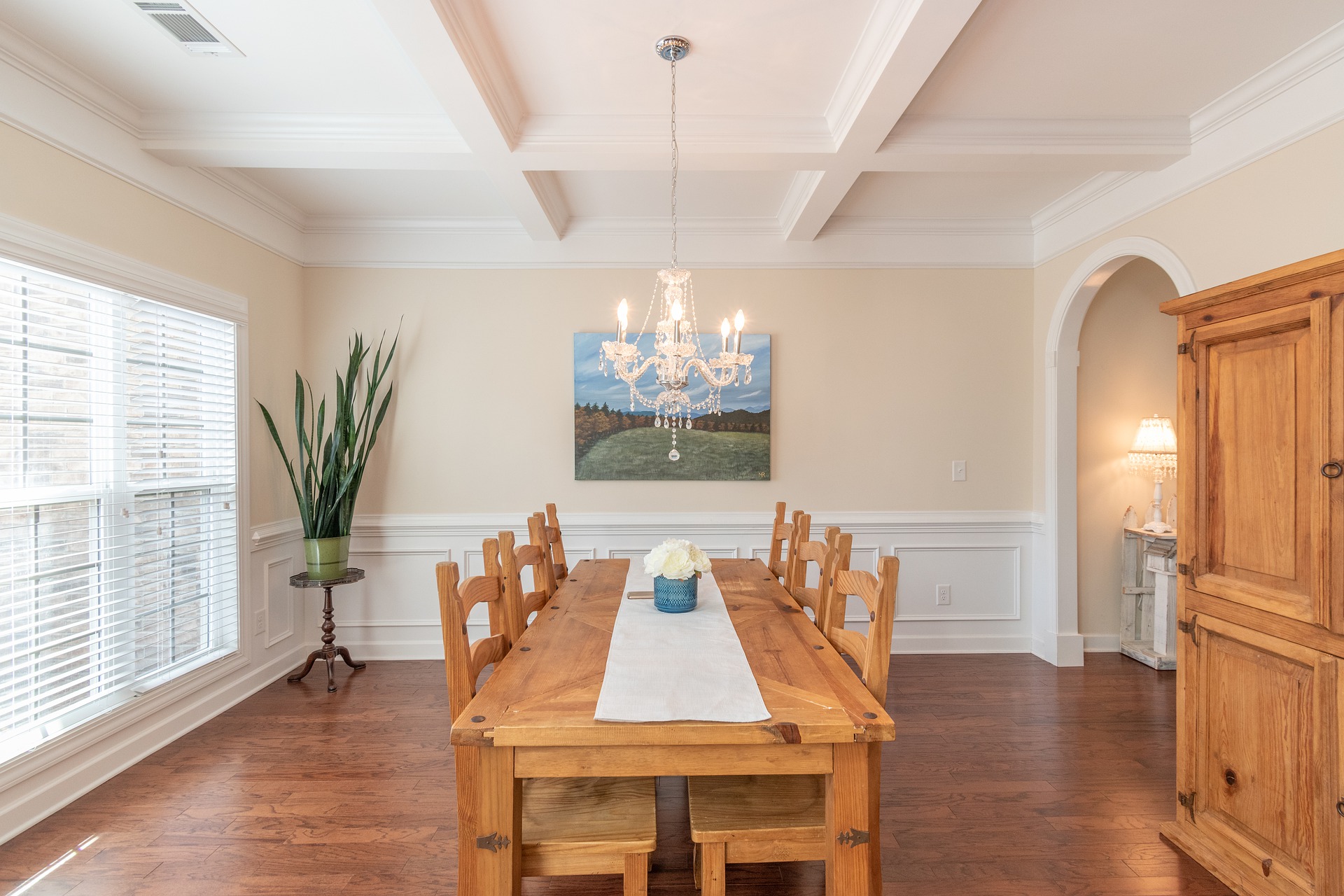 How to Tame Sound with Wood Coffered Ceilings

The ceiling has been a largely ignored surface in modest architecture over the past handful of decades. High end homes and commercial buildings were the only spot we’d encounter something other than flat ceilings. Nowadays, many designers consider the ceiling an integral part of interior design. Luckily, you can install great ceiling designs easily and affordably.

Whether you’re thinking of adding a false ceiling, a cube ceiling, or a wood coffered ceiling, each is capable of producing striking visual results. Acoustically, though, they are not created equally. Choosing certain designs not only opens up your visual possibilities, but they can also open up the possibility of incorporating soundproof ceiling tiles, making the room more comfortable.

One option that excels in both aesthetically and acoustically is the coffered ceiling. Let’s look at why.

What is a coffered ceiling?

Coffered ceilings have been around for a very long time. Some evidence suggests they’ve been around for nearly 2000 years. We’ve seen coffer architecture in many parts of the world, through many time periods in that time. Things don’t stick around that long unless they work. There are good reasons why they’ve remained a viable option for such a long time.

The ancient Greeks and Romans built coffered ceilings to reduce the weight of stone ceilings, and the technique has been used and improved upon ever since. A coffered ceiling is traditionally built with wood beams or hardwood moldings that criss-cross the ceiling in a grid pattern, with panels installed. It’s structurally sound, and it looks and sounds good to boot.

As far as how the name came about, the word “coffered” really just means indentation. It also refers to old, heavy strongboxes that people used to store their valuables, and a coffered ceiling looks like it was constructed of many of these boxes. Many famous mansions and historical buildings feature elaborate coffered ceilings, but not until recently have they been used in more modest construction projects.

Modern coffered ceilings can easily be suspended from a T-bar grid and come in options ranging from solid wood to veneer in almost any wood species you can think of. They also make access to the space above a breeze, meaning utility work doesn’t do any damage to your beautiful ceiling.

The beams and recessed portion design of coffered ceilings adds to the illusion of ceiling height and can make most rooms appear larger. It’s great in modern design. Pair that with the fact that materials have become more affordable, and coffered ceilings are experiencing a resurgence.

If you are beginning with low ceilings, however, coffered ceilings are not a good idea, as they can actually make the low ceilings feel more cramped than they already are. Make sure your ceilings are at least 9 feet high if you want to incorporate this style.

If you are wondering how a coffered ceiling is different from a Crawford ceiling, you can stop wondering. They are the exact same thing. In fact, there’s no such thing as a Crawford ceiling. It’s what is known as an eggcorn. Basically, that means that people have misheard the word coffered as Crawford, and the term stuck around.

If you’re thinking of installing a coffered ceiling with only one indentation, you’re actually planning what is known as a tray ceiling. Tray ceilings have a single indentation rather than multiple. They are still a very cool looking option, but they result in a more simplistic design and don’t offer the same acoustical benefits as a coffered ceiling.

Why is a wood coffered ceiling a good choice for noise reduction?

In order to understand why a wood coffered ceiling is better than other options when it comes to sound control and noise reduction, we have to understand what makes rooms sound noisy in the first place.

When sounds are produced, whether they be by human voices, footsteps, or your booming Bluetooth speaker, sound waves are emitted and transferred across the space. When they reach our ears, those waves are interpreted as sounds. When they reach the other objects in the room, they are either reflected or absorbed. The factor that determines whether the waves are absorbed or reflected is the makeup of the surface itself.

Sound waves that hit hard, smooth surfaces are reflected. When we have too many of these surfaces, the waves bounce back and cause echo and reverberation. Reverberation, in simple terms, is when sound waves continually bounce around the room, getting louder as the amount of sounds build. Too much reverb and we find ourselves speaking more loudly just to be heard, exacerbating the noise problem.

On the other end of the spectrum, when sound waves impact soft, porous surfaces, some of those waves are absorbed and taken out of the equation. Introducing softer, more porous materials to the room will help keep sounds from building and echoing in the room.

Creating a good mix of sound absorbing and sound diffusing, or scattering, materials is the best way to achieve a nice, natural sound for your space.

When we incorporate coffered ceilings into our home or office design, we are introducing an array of surfaces that scatter sound waves, so we don’t deal with reverberation. This keeps the conversations of others from competing with those we are having with the person across the table.

This is because the design of coffered ceilings reduces the incidence of horizontal sound reflection while maintaining the quality of the vertical sound reflections. Wood coffered ceiling tiles provide much smaller stretches of hard, flat surfaces, broken up by beams than a flat ceiling would. Using softer species of wood will increase the ceiling’s ability to absorb sound waves, but not nearly as much as using acoustical materials.

Any ceiling built with acoustical materials will perform better than those built with traditional materials. When you start with a design that’s conducive to good acoustics, like coffered ceilings, choosing the right materials can make them even more effective.

Modern wood coffered ceiling panels can be built to absorb much more sound than those of the past. Acoustical panels with many microperforations and acoustical backing materials absorb a good deal of sound waves and even lower the instance of sound transmission between multiple levels of the structure.

They can improve the sound in a room so much that guests will probably even comment on the audio quality, which goes unnoticed more often than not. Attention to this detail makes everyone more comfortable and events more enjoyable.

Deciding which type of coffered ceiling to go with

If you’ve decided you like the idea of coffered ceilings, you have to figure out what your preferences are regarding the style and configuration. Do you want a few large indentations, or do you want many smaller ones? Also, do you want to go with elaborate wooden beams or more clean shapes and straight lines? The look you achieve will depend largely upon the number and variety of lines you’re working with.

The possibilities are so expansive these days. You can achieve an almost overwhelming number of effects. Your choice should ultimately come down to your home’s architecture style, as well as your interior decorating style.

Going with smaller indented sections, also sometimes called a wood waffle ceiling due to its resemblance to the breakfast food, will give you a more classic look. It also provides more acoustical benefits than those with larger sections since it scatters more sound waves.

Choosing more interesting and intricate designs in your panels and moulding will also give you a more traditional look. That may include everything from the finish, to the wood species and grains, to the type of moulding used on your beams.

Wood coffered ceilings with larger sections work very well with modern decor. They aren’t quite as good acoustically, but they are less busy to look at and lend themselves to the simplicity popular in modern architecture and decor. They aren’t the best choice for creating a soundproof ceiling, but sometimes the right design will lead you to tame the sound elsewhere.

More ways to give the traditional coffered ceiling a modern look include using octagonal coffers rather than rectangular ones and painting the wood with bold colors. Again, there are so many options on the market today that you really have to dig in to see which options work best for you and your space.

Coffered ceilings: great looking and good for you

Of all the benefits of installing a coffered ceiling, noise reduction may be the most often overlooked, but there are good reasons not to ignore this particular benefit. How important is a comfortable ambiance to you? Do you go with the best acoustic insulation for ceilings, or do you go with something more reflective?

Keeping a more serene space for living and working lowers your stress levels and can increase your overall health. That’s something we can all get behind. Check out some wood coffered ceiling ideas, and you’re sure to find something that will improve the value of your home and make you love the indoors a whole lot more.