The Theater at Epidaurus – An Ancient Marvel of Acoustic Design 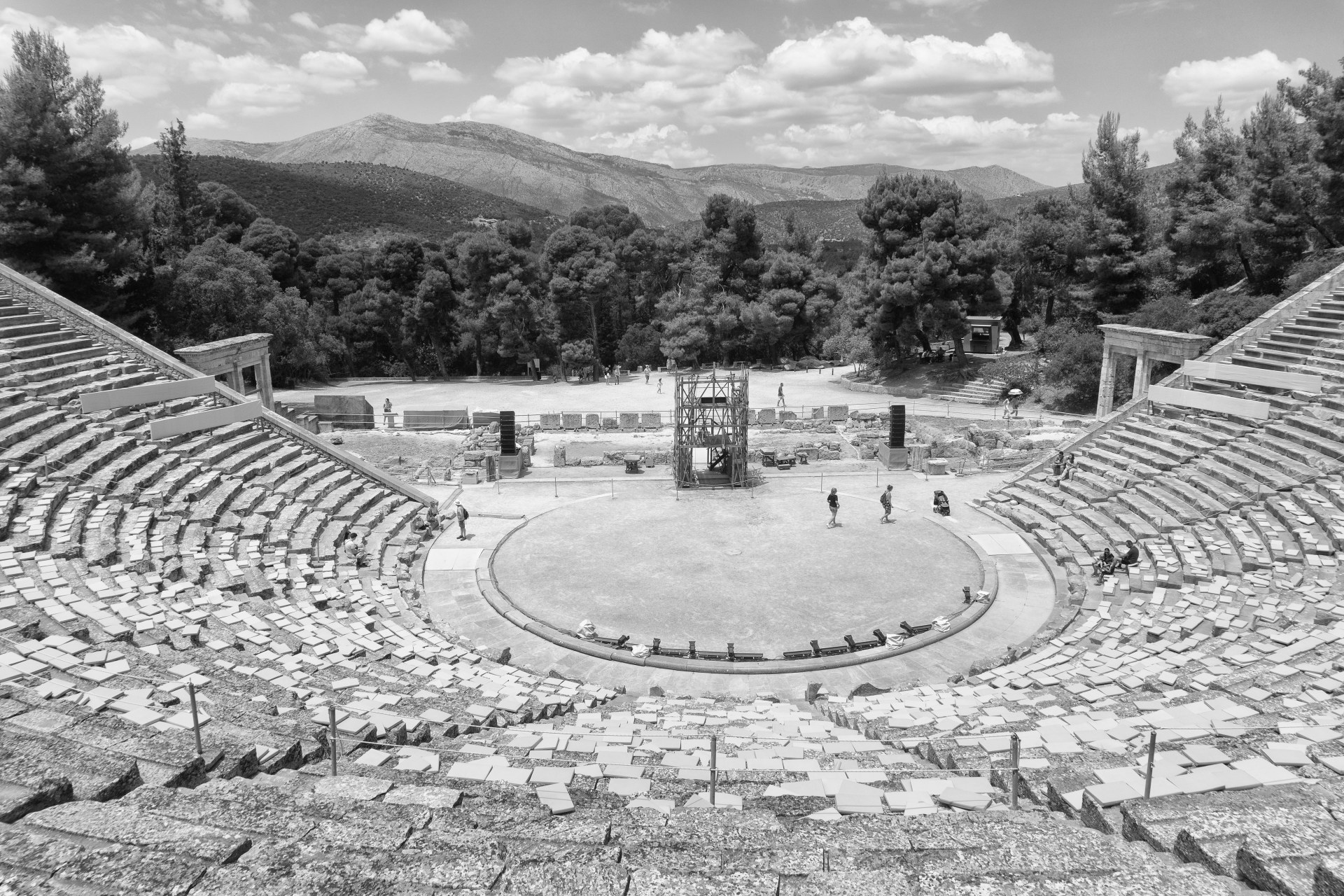 The Theater at Epidaurus – An Ancient Marvel of Acoustic Design

The ancient Greeks had a knack for tackling acoustics. They constructed dozens of massive, culturally important theater venues in the days before electronic amplification and needed to find ways to impart perfect acoustics into those theaters.

Through a mix of design and different construction materials, they were able to achieve the acoustics they were after. While the majority of them sounded spectacular, some theaters sounded better or worse than others. The most impressive of those ancient amphitheaters is the Theater at Epidaurus.

A brief history of the Theater at Epidaurus

Built in the fourth century BC at the direction of the architect Polykleitos the Younger, the ancient theater of Epidaurus became the model for all amphitheaters after it. The acoustic properties were perfect. So perfect, in fact, it’s said that even the back row audience could hear crystal clear speech from the performers on stage, millennia before microphones and loudspeakers were introduced.

It was originally constructed as a sanctuary dedicated to Asclepius, the ancient Greek god of medicine, and was used over the next 800 years to host music and theater events dedicated to his worship. On days where no performances were held, people went to the theater to be treated by priests for whatever ailments afflicted them.

The structure endured extensive damage due to war and weather throughout its history and was repaired numerous times. Political strife and a series of earthquakes led to the Theater at Epidaurus falling out of use in 426 AD, and it remained that way for the next 1450 years. The old relic was excavated in 1881 and refurbished section by section over the next 57 years before resuming performances in 1938.

The Theater at Epidaurus is still used today, some 2400 years after it was built. Today, it hosts a variety of performances, including the annual Epidaurus Festival. The Epidaurus Festival has been held there since 1955, which makes it one of the oldest performing arts festivals in Europe and one of the most important cultural events in Greece. It’s a fitting location for such an important event.

It’s amazing that the theater is still standing, but the fact that it’s still used today is a testament to the incredible acoustical foresight, as well as some degree of luck, that went into its design and construction. The acoustics lessons we can learn from the Theater at Epidaurus are as potent today as they were thousands of years ago.

Why were Greek amphitheater acoustics so good?

Theater was a huge part of ancient Greek society, and an inability to hear actors’ voices wouldn’t have sat well with the tens of thousands of people in attendance. In short, Greek amphitheater acoustics were so good because they had to be.

Aesthetically and acoustically, the Theater at Epidaurus is unmatched. But what are the aspects of a theater built thousands of years ago that make the acoustics continue to stand tall after all this time, and what can we learn from them?

Numerous scholars and audio experts throughout history have speculated on the reasons why the acoustics in this architectural masterpiece were so superior to other concert and theater structures from around the world. They came to a number of very valid conclusions that told part of the story, but the whole scope of what was going on wouldn’t be fully understood until the twenty-first century. Let’s look at what makes the Theater at Epidaurus work so well.

One of the foremost speculations over the years is that the Epidaurus theater location is responsible for its incredible acoustics. Situated on the west side of Cynortion Mountain, the shape and specific slope of the location, as well as the winds that carried sound waves up through the theater were thought to be likely reasons the theater’s acoustic profile was so enviable.

While the location and 26 degree slope do play roles in contributing to the sound profile inside the theater, comparisons with similarly situated theaters have proven that location doesn’t tell the whole story.

Another benefit connected to the Epidaurus theater’s location is the fact that builders were able to construct a nearly perfectly symmetrical theater. This symmetry plays huge into the exemplary acoustics experienced at the theater, which made it a likely candidate for the reason behind the near perfect acoustics.

The ancient Greeks had this part figured out, but successive attempts to recreate the sound proved they still didn’t have the answer to what made the sound at the Theater at Epidaurus so flawless.

Some scholars have even speculated that masks may have had something to do with the impressive sound at Epidaurus. Actors on ancient Greek stages often wore masks so the people in the back rows could see their facial expressions more easily. They were also great at projecting their voices since modern amplification technology wouldn’t exist for another couple thousand years.

Some audio experts thought that the masks actors wore may have functioned as ancient sound amplification devices. Again, the masks may have had some impact, but studies have shown that this still doesn’t fully explain why the theater sounds so great.

It’s all in the seats

The reason the sound at the Theater at Epidaurus was so far superior to every successive attempt to recreate it comes down to the 55 semi-circular limestone seating rows that define the shape of the theater itself. The seats act as acoustic traps. Let’s take a look at what that means as far as acoustics.

In 2007, a research team with the Georgia Institute of Technology found that the design and construction of the limestone seats act as an acoustic filter. It subdues the lower tones in human voices and actually does a great job muting the murmur of the crowd. On the other end of the spectrum, the higher tones are reflected back to the audience, allowing them to hear speech with great clarity.

We can still hear the full range of the actors’ voices and music because of a phenomenon known as virtual pitch. Virtual pitch is an incredibly complicated audio phenomenon, but very basically, when we hear a combination of harmonics of a particular pitch and frequency, our brains will insert the fundamental frequency into the audio we’re hearing.

The ancient Greeks likely didn’t know that the human brain was capable of filling in missing audio information like that or how to create a theater that relied upon such an obscure phenomenon, but this is what tipped the scale and made the acoustic properties at the Theater at Epidaurus the envy of the ancient world.

How we use these acoustic principles today

The ancient Greeks never really figured out exactly why the Theater at Epidaurus sounded so great or the reason why they could never reproduce it. It took nearly 2500 years for researchers from far away lands to determine the reason why this amphitheater in Greece blows all others out of the water.

We still base our modern amphitheaters on the designs of the ancient Greeks. We use absorption and diffusion to create perfect audio profiles in our theaters, recording studios, and media rooms. We understand how sound waves interact with different types of materials, and we build music and performance structures with a mix of materials that produce the best possible acoustics.

Architectural acoustics today are a culmination of all the things we’ve learned through our shared human history. In the twenty-first century, we have millennia worth of data to fall back on and have reached the point where we can create nearly perfect acoustics for any space and any purpose.

The lessons learned from the Theater at Epidaurus go into the designs of our spaces. Still, it also goes into the design and construction of the acoustical materials that allow us to turn our music up to eleven, all while maintaining sound quality and not bothering the neighbors.